A Graphic Look at the Road to the Stanley Cup

When the Washington Capitals closed out the 2018 NHL Eastern Conference Finals series against the Tampa Bay Lightning, securing their first Stanley Cup appearance since 1998, fans were overwhelmed and overjoyed. For Russ Ramey, Vice President of Marketing, ColorNet Printing & Graphics, it was a similar feeling, but in a different sense. 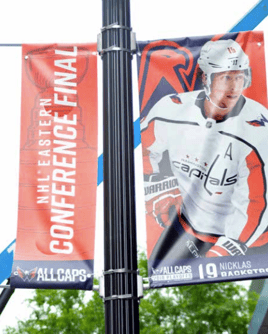 Through its contract with Monumental Sports, which owns the Capitals and other Washington D.C. teams that play at the Capital One Arena, ColorNet would be handling the production and installation of all the graphic displays. So what does it take to create a winning look for a championship series? Here’s the play-by-play.

Friday, May 25–Sunday, May 27: Ramey receives the iconic Stanley Cup artwork from the NHL. The WNBA’s Washington Mystics play at home on Saturday, so ColorNet has limited access and cannot complete measurements until Sunday.

Monday, May 28 (Memorial Day): Ramey and his team adjust the NHL’s artwork to fit measurements, at which point they learn the NHL wants to make their own adjustments.

Tuesday, May 29: The NHL approves artwork, but there are issues with the file. Printing starts at 5:00 pm and completes at 9:30 am the next day.

Wednesday, May 30: ColorNet’s entire crew is on-site by 6:00 am, with teams staggering installations at 7:00 am and noon. During arena installation, one of the panels being installed is ruined by the strong winds, and Ramey must print a replacement on-the-fly. ColorNet also begins art installations at other locations, including the nearby Grand Hyatt Washington hotel and the Kettler Capital Iceplex in Arlington, Virginia, where the Capitals practice. All installs are completed by 11:00 pm. 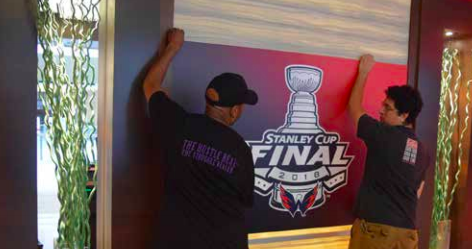 Thursday, May 31: Upon review, the NHL requests three of the large exterior banners be swapped for eight Stanley Cup logo banners. Later in the day, an NHL representative notes the column panel that replaced the damaged one is falling off. Ramey and his team must act quickly  and work overnight to complete the job, finishing around 3:00 am. 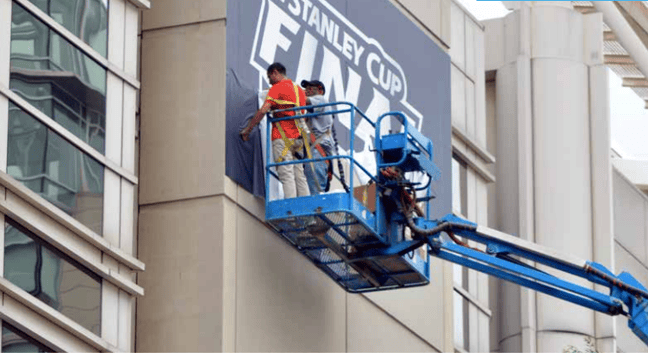 When the Capitals ultimately took the championship title, Monumental Sports and ColorNet needed to plan for the city’s celebratory parade. ColorNet printed and hung over 200 banners on street lamps from 23rd to 3rd Street and worked with three other local printing companies to produce 120,000 posters for distribution. NBC Sports Washington also hired ColorNet to print 25,000 posters for the parade. 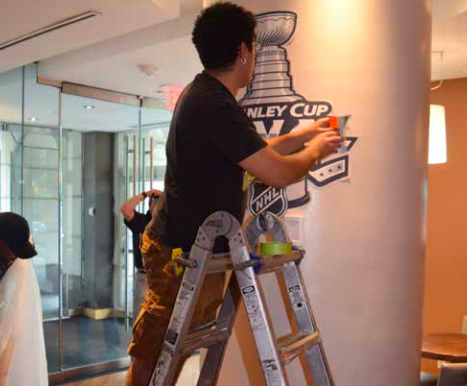 See the full story behind the installations — and a look at what was happening in Las Vegas for the Capitals' opponents, the Golden Knights — in the SGIA Journal.