A Heated Competition Gets a New Twist 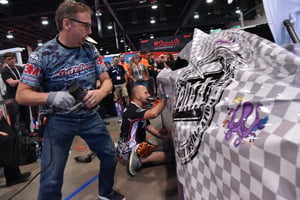 After a successful Wrap Team Challenge in 2018, the PDAA Installers Committee decided to kick things up a notch with this year’s PDAA Pro Team Relay. Last year, two-person teams competed to see how much of the side of a Ford Mustang they could wrap in 20 minutes. It was fun, exciting and suspenseful as teams worked to outdo each other for the grand prize of $2,000. And this year’s Pro Team Relay will definitely build on that concept of teamwork.

In the competition at PRINTING United (Dallas, October 23 - 25), teams will race to wrap the quarter panel of a car, put a two-piece graphic on a rivet wall, manage the rough contours of a faux brick surface, and apply two-color vinyl on acrylic to test their alignment skills.

But the PDAA Pro Team Relay comes with a twist. For those that don’t have a two-person team to register, their names will be drawn from a hat and the first group (up to 10) will be paired with an all-star installer. The prize money is serious again this year, with the first place team taking home $2,000.

The competition is also no exception when it comes to PRINTING United's "bigger, better, bolder" mantra. Look for more lights, music and action as installers from across the country vie for first place and bragging rights. The competition itself will take place the first two days of the trade show, with the winner being crowned on October 24 at our reception in booth 7250. 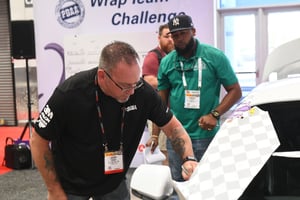 Jeremy Conner from Who Did That Inc. will be our lead judge and emcee, joined by Chad Huhman from CNJ Wraps, and a special guest judge who will be revealed on day one of the competition. The judges will be grading on quality of install, determining the winning team by who completed the stations fastest with the fewest “dings.”

Whether you're an installer, or a spectator cheering on your favorite team, the PDAA Pro Team Relay is sure to be a hit, and you definitely don’t want to miss the excitement! Join us for all the action in booth 7250 at PRINTING United!

Learn more or register for the PDAA Pro Team Relay.