Duke Steerborn Gears Up for Dallas 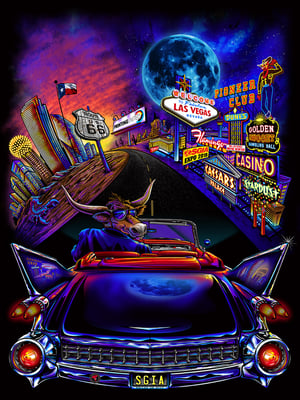 As the moon shown down on the bright lights of Las Vegas, a lone figure we call "Duke" packs up the last of SGIA Expo 2018. He'd had a great run in this town, but the time had come for new horizons. He hops into his classic, black '59, '60, '61 automobile, as Johnny Cash — the man in black himself — so sang, and drives off into the sunset.

A billboard catches his eye ... "PRINTING United."  He turns with eyes focused on the road — all set for the long drive to Dallas for bigger, better, bolder!

This was the full story behind the show shirt design for the 2018 SGIA Expo in Las Vegas, which signaled the event's transition to this year's PRINTING United (October 23 - 25). The Graphic Elephants team has been honored to design, develop and print the event shirts for the last few shows, and here we are again for its latest iteration. 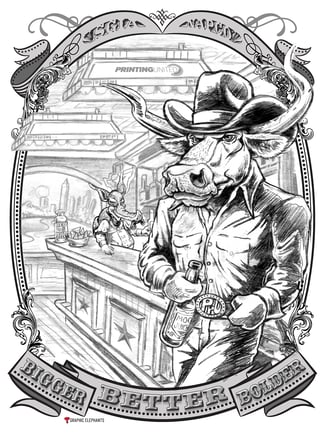 With direction from the SGIA team last year, we conceptualized a character that is iconic to Texas making his way out of Las Vegas — hence, Duke Steerborn was created! Now, a year later with a new show in a new city, we decided to update him in his new environment with new duds and a new attitude: The "Urban Cowboy" would be our new theme. Coincidentally, this was part of the original inspiration for this layout and, at the request of SGIA, an armadillo — another common animal in Texas — became our bartender in this saloon. He even has a handlebar mustache and clothing that matches that old-time country look: "Be sure to help yourself to a little Red Hot sauce and nachos while ya'll are here.”

A rustic motif would do very nicely for this dazzling urbanite from Sin City, so we will be rendering much of the interior with a considerable amount of wood texturing and dust, particularly in the floor and bar. Some mood lighting within the inset shelving behind the bar where the bottles are sitting is an effect we are going for. We will implement surface textures to give a creative look and feel for a rustic setting. Little details will enhance the belt buckle on Duke, the label on the bottle and the Tiffany-style lamps above the bar. This all helps create a fun illusion.

And, much like last year's Vegas-to-Dallas story design, we will showcase PRINTING United's host city in 2020: Atlanta. The big bay window at the end of the bar will have a representation of Georgia's capital, and appropriately has a peach as the sun setting over the city. 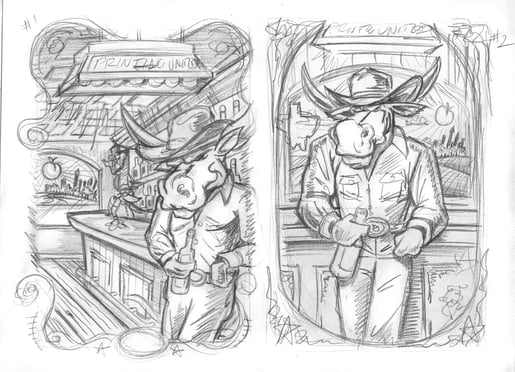 We have recently been given the go-ahead from our pencil sketches, and are in the midst of tightening up the roughs for scanning, where we will will begin our coloring. We just love coloring!

Be on the lookout for the final design, which will grace the cover of the SGIA Journal Apparel Edition's Summer 2019 issue. The shirts will be on sale throughout the expo (proceeds are donated to a different cause every year).

Special thanks, as always, to our long-term partners ("usual suspects" as we call them), who donate their resources for producing the show shirts, including: