Installers Show They’re Up to the Challenge

If you attended the 2018 SGIA Expo, chances are you heard about — or were among the large crowd at — the first-ever PDAA Wrap Team Challenge. Sponsored by Arlon, Ritrama and 3M, the intense three-day competition was a chance for nine teams of vehicle wrap specialists to show off their skills while competing for a $2,000 grand prize. 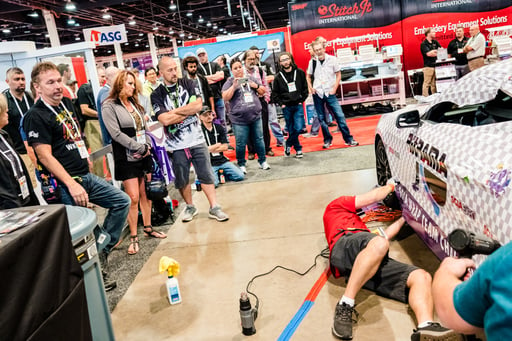 On day one, each team had 20 minutes to wrap the side of a Ford Mustang GT using material provided by Arlon. The seven surviving teams went on to compete in day two with 30 minutes to wrap the same vehicle — this time with different vinyl, courtesy of Ritrama, and the additional challenge of wrapping the door handle. The final day saw the remaining teams battling it out using 3M vinyl, with Istvan (Steve) Hargittai (Florida Car Wrap) and Jim Miller (Miller Decals) ultimately being crowned the champions.

These two, however, will have to defend their title when the competition returns at PRINTING United 2019 (October 23–25, Dallas) in booth 7250. As we gear up for the next challenge, I spoke with 2018 Wrap Team Challenge Head Judge Jeremy Conner (Who Did that Inc.) for an insider perspective.

How did the teams differ from one another (experience, installing, etc.)?

We had a range, from seasoned veterans with multiple wins under their belt to first-time competitors. They really took the time to learn from each other.

How were the teams judged on day one?

It was a combination of speed and quality. Therefore, the fastest wasn't necessarily the winner if quality was lacking.

How did the difficulty increase for day two?

The difficulty level was similar to day one, but the different vinyl required new install techniques. There was not much extra time added for the door handle. No one completed everything. 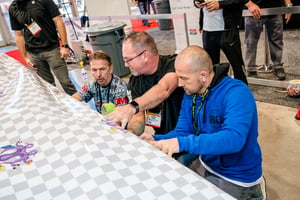 Were there particularly exciting moments or “upsets” that led to the final round and last three teams?

It was very exciting due to mistakes that eliminated a few who would have moved on. The pressure really kicked in. Some critical errors were made in the heat of the competition disqualifying a team and bringing fourth and fifth places back to a prize-winning position. It was very close at that skill level.

How were the final competitors judged?

Extra scrutiny was given to placement and quality. They were given a little extra time to see if anyone could actually finish — door handles and all — and they did!

How did the different vinyl throughout the competition impact the teams? Was each designed for a smooth, clean installation; long-term conformity to complex vehicle cures; and clean removal?

Each vinyl is different, from initial tack to stretchability and memory. Skills used one day were not the same ones needed other days, and a working knowledge of each was required as well as the ability to adapt.

All the vinyls we used are carefully designed for performance, but each has different strengths. 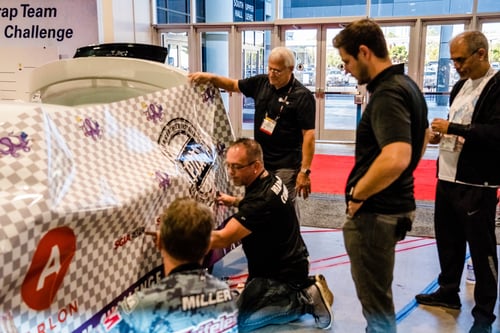 In your opinion, what was the best part of the competition?

The great excitement and anticipation every day, not just from the competitors, but the crowd. Some even mentioned they missed other parts of the show to see our competition!

What stood out in your mind as a first-time judge?

The camaraderie between the installers and their willingness to learn from each other!

How did this competition differ from others you have judged? Do other competitions offer cash prizes?

I've never judged one that utilizes three different vinyls and requires installers to use different skill sets each day. And yes, cash prizes are always a great incentive.

Are you up to the challenge? Before the next competition commences in October, take advantage of upcoming PDAA workshops and events, including next month’s Master Certification testing.