For the Graphic Elephants team, it was an honor to be asked to create the SGIA Expo show shirt for the second straight year. It’s not only a project for the biggest trade show in the industry, but proceeds from the shirt sales are donated to a local charity.

This year’s design concept provided quite a challenge for us. As the Expo, as it has always been known, heads to Las Vegas this year, it will be laying the groundwork for its transition to the new, bigger and better PRINTING United in 2019. We would need to illustrate that story, as it were. 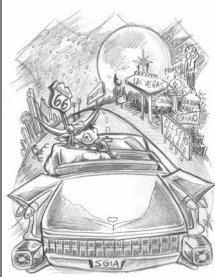 This sparked the idea to give the design a “Las Vegas to Texas” vibe. With a few more notes and the inclusion of key locations on the strip related to the show, an idea was locked into place and the design was created for the cover of the Summer Garment Journal as well as the show shirts to be sold at the 2018 Expo.

Being old school kind of folks, we thought what better way to travel from Vegas to Dallas, than in a cherry vintage Cadillac convertible (those fabulous fins and all that chrome!). The car was going to need a driver and since we are heading to Texas, a Longhorn was the obvious choice. We had a little fun with that terrain between the two areas by adding a desert scape and remnants of the rocky structures of Monument Valley.

With the SGIA staff’s enthusiasm for the concept, we moved on to the research portion of the project. Both cities have iconic buildings and structures and required reference to be accurate. We used a variety of online photos for specific elements and details. We leaned toward old Vegas — the unique style of neon and lights that once brightened the city the King of Rock ’n’ Roll headlined. Naturally, the “Welcome to Fabulous Las Vegas” sign would be included. To help tell the story from old to new, we illustrated Dallas with present day architecture and glistening glass buildings to contrast the vintage Vegas style.

The request to include a TAO sign, the nightclub where there will be an opening night party and farewell to the SGIA Expo, was included at the end of the strip. Iconic signs, such as the Pioneer Club cowboy and glow from the Stardust, were musts. We even managed to fit Mr. Las Vegas himself, Wayne Newton, on the sign at the Dunes. 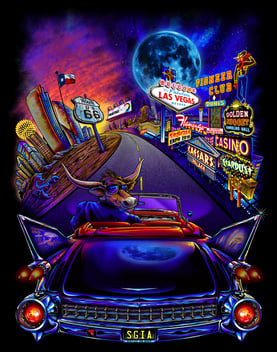 If you’re attending this year’s SGIA Expo, you can see for yourself the results of much hard work and devotion. A very special thanks to those usual suspects who contributed to this process:

• Shirts by Fruit of the Loom

The 2018 SGIA Expo show shirt will be available on-site for $5. Proceeds will support the Nevada SPCA. Read more on the behind-the-scenes of the design.